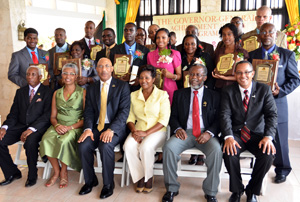 Fifteen residents of the County of Cornwall were on August 30 presented with the Governor-General’s Achievement Awards, for contribution to their communities and the wider society.

Governor-General, His Excellency the Most Hon. Sir Patrick Allen, made the presentations at a ceremony held at the Tryall Club in Hanover.

The awardees – three each from the parishes of St. Elizabeth, Westmoreland, Hanover, St. James and Trelawny – were praised by the Governor-General for rising above their humble beginnings to attain personal success and give back to their communities.

The Governor-General noted that they stand as examples of what Jamaica can achieve through hard work and dedication.

“Our nation can, and must learn from you and other recipients of the Governor- General’s Achievement Awards, who are living proof of the fact that belief in one’s potential, plus hard work and perseverance, will result in goals achieved.  That is the recipe for individual achievement, that is the recipe for our national progress,” he stated.

Speaking out against the “get rich quick” mentality, which he said, abounds in some sectors, sometimes giving rise to criminal activities and social instability, he said it is time that more recognition is given to legitimate achievers in the society. 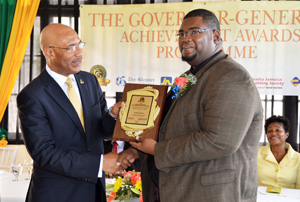 “They build strong caring families, they build communities and they build the nation,” he stated.

The Governor-General, in his address, hailed the many accomplishments of Jamaicans at home and abroad, which he said, give the nation ample reason to celebrate during this 50th year of Independence.

“You may agree with me that the achievements of our people seem to be a response to the imperative of our first National Hero, the Right Excellent Marcus Mosiah Garvey, who once urged black people with the words ‘up you mighty race, you can accomplish what you will’,” he stated.

He said there is an indomitable spirit within all Jamaicans that spurs them to aim for the top and to be number one in whatever they do, and it is that same spirit, which “must now allow us to see the bigger picture beyond self and personal needs, and propel us forward as a united nation to embark on the next 50 years of our journey and beyond”.

The Governor-General Achievement Award Scheme was instituted in 1991 to acknowledge and award the meaningful contribution of individuals at the community level.  In 2006, the Youth Award for Excellencewas introduced to promote excellence as a habit among young people.

The Jamaican Diaspora Award For Excellence, presented for the first time in 2008, recognises exceptional service to Jamaica by nationals living in United Kingdom, Canada and the United States of America. The award is presented biennially to three individuals.

Over the last 21 years, over 400 persons have been honoured, including some 30 young people.

The Governor-General used the occasion to express appreciation to the Custodes of the various parishes, whom, he said, have bought into the initiative and have kept it relevant in their respective parishes over the years.