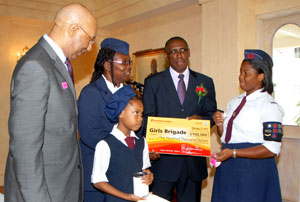 (JIS) Governor-General, His Excellency the Most Hon. Sir Patrick Allen, is encouraging service clubs to adopt modern methods as part of their programme offerings in order to attract more young people.

He noted that while the principles being imparted will always be relevant, it is important that programmes are delivered within the context of contemporary realities.

“And so we (have to) use the technology that is available, we use all the tools at our disposal and we redefine ourselves, if we are going to have a vibrant, productive and relevant organisation,” the Governor-General stated on February 27, as he addressed the media launch of Girls’ Brigade Month and the organisation’s fundraising tag drive at King’s House in Kingston.

He noted that transition management is also critical to ensure that membership does not dwindle and that persons will be interested to join and remain members.

“It is our responsibility, as those who are responsible for guiding our young people, to ensure that we give them clear paths and show them how to redefine themselves so that they can carry on the functions of their organisations,” he stated.

The Governor-General commended the work of the Girls’ Brigade in moulding young women into worthwhile citizens, who can contribute to national development. He noted that the values and beliefs promoted by the movement are critical.

The Girls’ Brigade is organising a month of activities in March, to highlight its work in fostering the holistic development of young women.

These events will provide opportunity for all Brigade companies to join together as one national group; encourage friendly competition; strengthen the organisation’s commitment to community service; and raise funds for the continuation of its work.

Some of the major activities are: a national thanksgiving service at Meadowbrook United Church on Sunday, March 18; and a national fellowship day and rally of brigade groups at St. Andrew’s High School on March 31.

The annual tag drive is the Brigade’s main fundraising activity from which it is aiming to raise $1.5 million this year. Senior Vice President, Human Resources, Bank of Nova Scotia, Michael Jones, launched the drive, presenting a $100,000 donation on behalf of his company.

The Girls’ Brigade was established in Jamaica in 1923 and adopted its current motto: ‘Seek, Serve and Follow Christ’ in 1968.

The organisation provides activities designed to help girls attain physical, mental and spiritual maturity, within the context of the church, while making the activities fun for its membership.